Why People Are Skeptical Of Trend Following

This mindset is holding you back 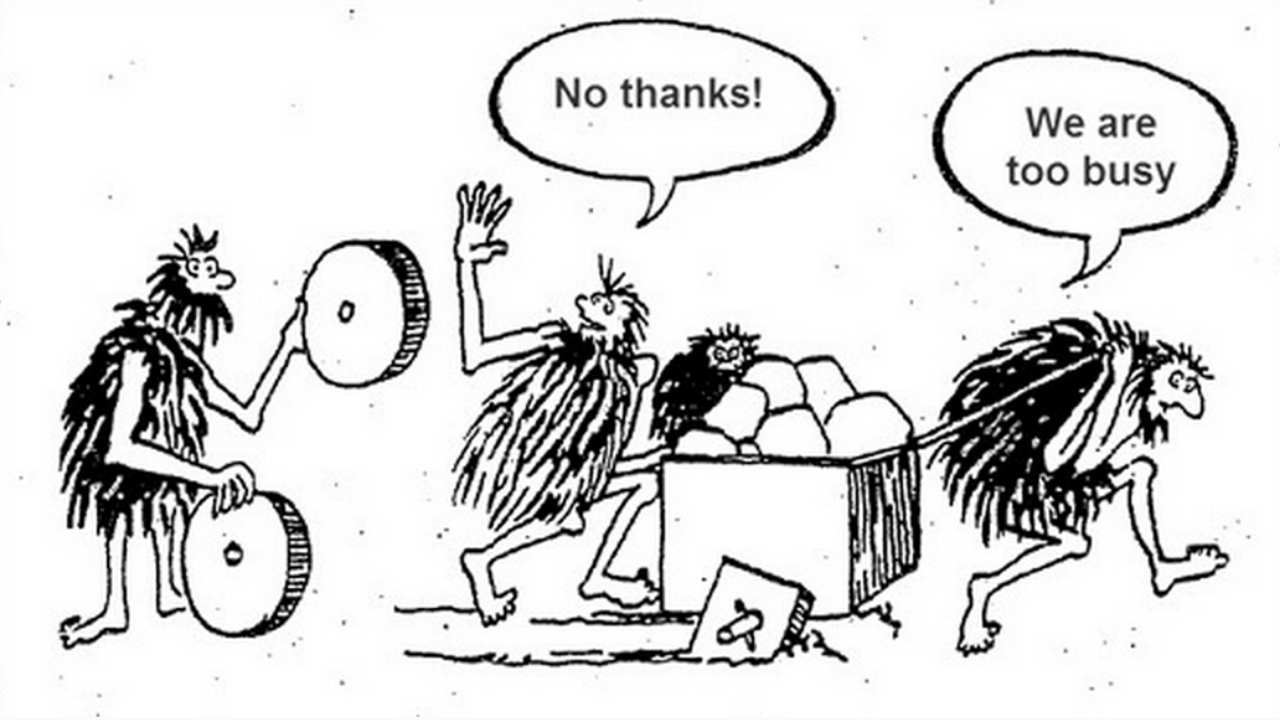 Some waste years sitting on the sidelines.

They can’t take a step forward.

They can’t believe there is an alternative way to invest beyond buy and hold, efficient markets and Warren Buffett worship. They love to come at me the messenger with anger on top of anger:

Mutual funds, brokers, financial news, big banks, and 23-year-old AP finance writers fresh out of journalism school, the ones who literally make up the fundamental news and predictions daily, have all been a massive sham, wittingly or unwittingly. To say that puts a .30-06 bullseye figuratively between my eyes.

Provoke reactions. Cause some to whine. Yes, that’s what I do.

Here are a sample of skeptics and critics:

The [trend following] field is marked by unsubstantiated claims of success; a track record of failure and associated rationalizations; a lack of peer reviewed studies showing any positive results; and a collection of logical, mathematical and statistical fallacies. Although there are plenty of technical traders having success, there is no evidence that they are anything more than statistical artifact and the hidden use of standard, subjective, fundamental analysis. Technical traders fail to realize that the market would quickly overwhelm any truly successful system, rendering it useless.

Trend following is one of the stock market’s biggest cons; I would even go so far to compare the concept to a cult like Scientology.

Examining only price action is clearly a kind of primitive attempt. The analogy I think of is in trying to explain the movement of oceanic water. Examining nothing other than the surface phenomena of price action is analogous to looking at surface wave movements only—where the wind explains some part of the movement. Now what might really be moving bodies of water requires a fundamental model—for example, how gravity, the moon, ocean floor structure, temperature might explain the movement of oceanic water mass. 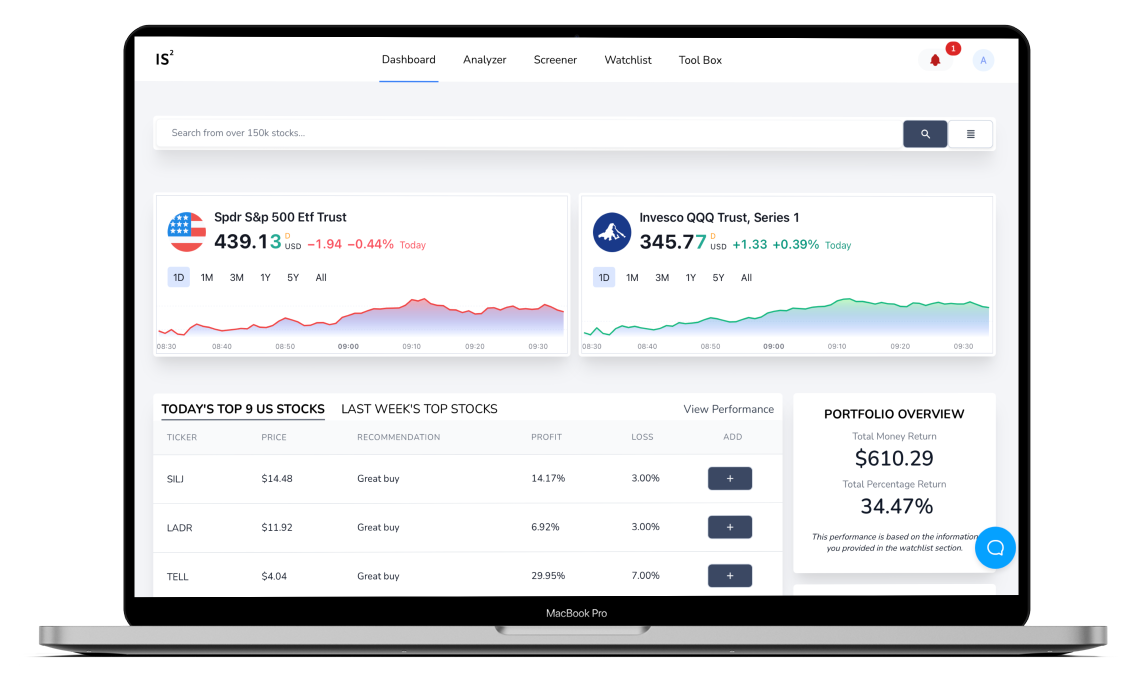 Join The Impeccable Stock Software to find breakout stocks, know exactly where to buy and get access to alerts

One critic could not wrap his arms around the idea.

He yelled and beat his chest in argument for a long time. However, you need to judge whether Dunn Capital, a firm with a 40 plus year performance track record, a firm that has made hundreds of millions in profit as a trend following trader, is wrong with their no prediction wisdom. Or whether my critic, who works as a massage therapist, is right with his “trend followers do predict” wisdom.

Some will never know and keep on ripping. For example:

“I’ve found Covel’s previous books interesting, and have re-read ‘Trend Following’ multiple times. The latest book unfortunately does nothing to build on the previous works (for instance, there is still no attempt to deal with survivorship bias in the performance data), but instead loads the pages with random anecdotes and film quotations that tangentially sup- ports his thesis. Disconcertingly, what the book lacks in substance is made up for in ego. If you’re not with him, you’re against him and a moron. Successful value investors? Don’t exist (sorry Mr. Buffet, you made your money through luck and speculating with derivatives). Covel admonishes the world for ‘going with the herd’… ummm… isn’t following a trend exactly that? Too light on science, way too light on humility.”

“A man with a conviction is a hard man to change. Tell him you disagree and he turns away. Show him facts or figures and he questions your sources. Appeal to logic and he fails to see your point.”

Skepticism for some simply hurts too much.

“It would seem that expecting people to be convinced by the facts flies in the face of, you know, the facts. The theory of motivated reasoning builds on a key insight of modern neuroscience: Reasoning is actually suffused with emotion (or what researchers often call ‘affect’). Not only are the two inseparable, but our positive or negative feelings about people, things, and ideas arise much more rapidly than our conscious thoughts, in a matter of milliseconds—fast enough to detect with an EEG device, but long before we’re aware of it. That shouldn’t be surprising: Evolution required us to react very quickly to stimuli in our environment. It’s a ‘basic human survival skill,’ explains political scientist Arthur Lupia of the University of Michigan. We push threatening information away; we pull friendly information close. We apply fight-or-flight reflexes not only to predators, but to data itself. We apply fight-or-flight reflexes not only to predators, but to data itself. We’re not driven only by emotions, of course—we also reason, deliberate. But reasoning comes later, works slower—and even then, it doesn’t take place in an emotional vacuum. Rather, our quick-fire emotions can set us on a course of thinking that’s highly biased, especially on topics we care a great deal about. Consider a person who has heard about a scientific discovery that deeply challenges her belief in divine creation—a new hominid, say, that confirms our evolutionary origins. What happens next, explains political scientist Charles Taber of Stony Brook University, is a subconscious negative response to the new information—and that response, in turn, guides the type of memories and associations formed in the conscious mind. ‘They retrieve thoughts that are consistent with their previous beliefs,’ says Taber, ‘and that will lead them to build an argument and challenge what they’re hearing.’ In other words, when we think we’re reasoning, we may instead be rationalizing. Or to use an analogy offered by University of Virginia psychologist Jonathan Haidt: We may think we’re being scientists, but we’re actually being lawyers. Our ‘reasoning’ is a means to a predetermined end—winning our ‘case’ and is shot through with biases. They include ‘confirmation bias,’ in which we give greater heed to evidence and arguments that bolster our beliefs, and ‘disconfirmation bias,’ in which we expend disproportionate energy trying to debunk or refute views and arguments that we find uncongenial.”

Why will the majority never trade like a trend following trader?

That is one major reason.

Here is another reason:

However, skepticism is important and often invigorating for many reasons:

You are on the right track when a target appears on your back.
Making a sizable dent in public thought brings detractors and saboteurs. It’s part of doing business.
Trying to get everyone to like you is mediocrity.
You are going to be criticized if you play small or play big. Might as well play big. Criticism will come either way.
History does not remember those who pretend to be neutral. Picking sides, choosing those you want to be associated with, and sticking with your true beliefs, is all that counts.
Speaking out on issues, that others are too afraid to speak against, will draw criticism.
Disgruntled people need to release anger. Standing there as an easy outlet for their anger is part of the gig. Criticism always parallels influence.
It takes courage to see things for what they are, not what you want them to be.
Poking an inferiority complex brings out vitriol–always.
Carl Sagan had something he called The Fine Art of Baloney Detection (PDF). An excerpt:

“What skeptical thinking boils down to is the means to construct, and to understand, a reasoned argument and—especially important—to recognize a fallacious or fraudulent argument. The question is not whether we like the conclusion that emerges out of a train of reasoning, but whether the conclusion follows from the premise or starting point and whether that premise is true.”

Wherever possible there must be independent confirmation of the “facts.”
Encourage substantive debate on the evidence by knowledgeable proponents of all points of view.
Arguments from authority carry little weight—“authorities” have made mistakes in the past. They will do so again in the future. Perhaps a better way to say it is that in science there are no authorities; at most, there are experts.
Spin more than one hypothesis. If there’s something to be explained, think of all the different ways in which it could be explained. Then think of tests by which you might systematically disprove each of the alternatives. What survives, the hypothesis that resists disproof in this Darwinian selection among “multiple working hypotheses,” has a much better chance of being the right answer than if you had simply run with the first idea that caught your fancy.
Try not to get overly attached to a hypothesis just because it’s yours. It’s only a way station in the pursuit of knowledge. Ask yourself why you like the idea. Compare it fairly with the alternatives. See if you can find reasons for rejecting it. If you don’t, others will.
Quantify. If whatever it is you’re explaining has some measure, some numerical quantity attached to it, you’ll be much better able to discriminate among competing hypotheses. What is vague and qualitative is open to many explanations. Of course there are truths to be sought in the many qualitative issues we are obliged to confront, but finding them is more challenging.
If there’s a chain of argument, every link in the chain must work (including the premise)—not just most of them.
Occam’s Razor. This convenient rule-of-thumb urges us when faced with two hypotheses that explain the data equally well to choose the simpler.
Always ask whether the hypothesis can be, at least in principle, falsified. Propositions that are untestable, unfalsifiable, are not worth much.
Consider the grand idea that our Universe and everything in it is just an elementary particle—an electron, say—in a much bigger Cosmos. But if we can never acquire information from outside our Universe, is not the idea incapable of disproof? You must be able to check assertions out. Inveterate skeptics must be given the chance to follow your reasoning, to duplicate your experiments and see if they get the same result.
Brilliant stuff from Mr. Sagan.

Bottom line, society’s insatiable push to discredit those who rock the boat, coupled with digital printing presses cataloging it all, has allowed village idiots and Nobel Prize winners to effectively share the same stage. In this environment, for many, the truth has ceased to matter. 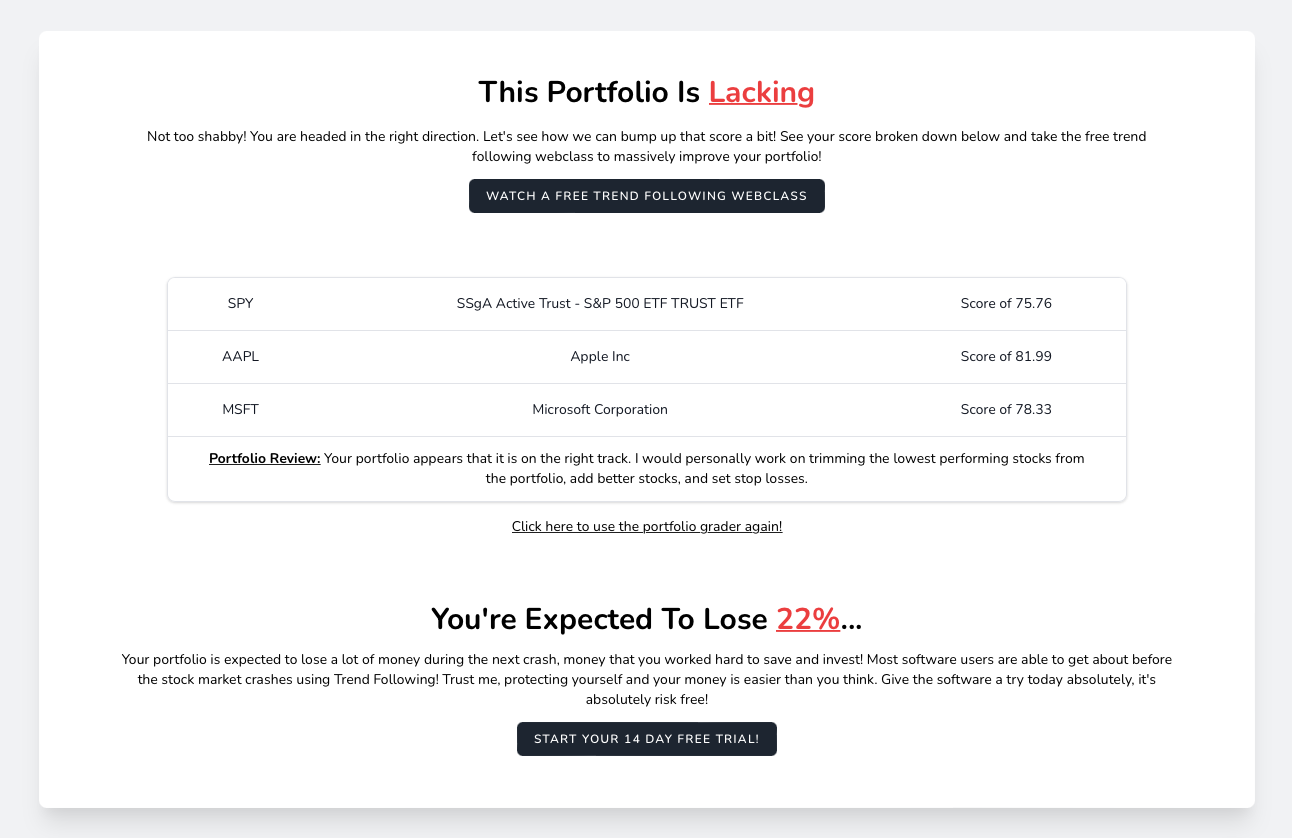 This tool will allow you to see how your portfolio and stock's are expected to do, if they perform well together and more. 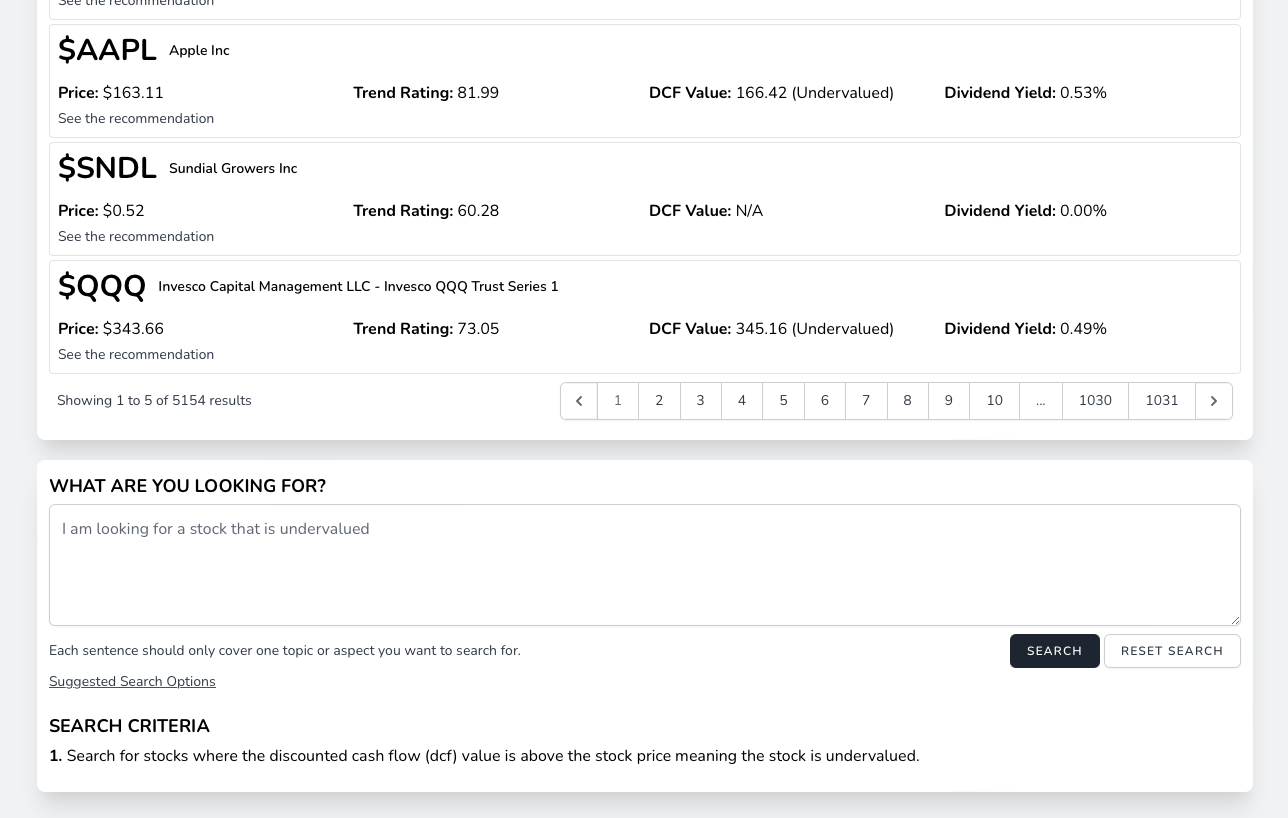 This tool will help you find amazing stocks based on what you are looking for. Simply type in "i want a fundamentally undervalued stock" and it will find stocks that match that. 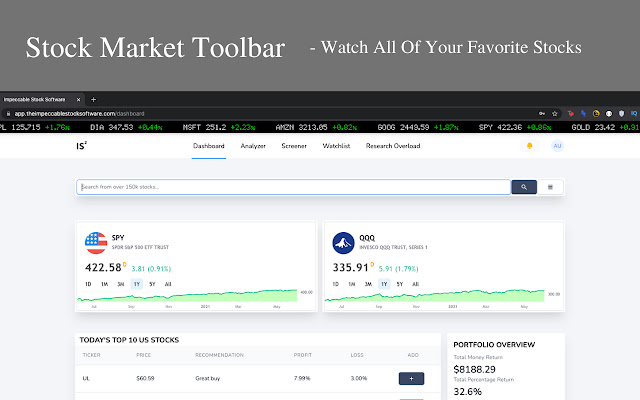 This tool allows you to track stocks without needing another tab or browser open. Track stocks at work, while playing games, etc.